Music Helps People with Memory Loss Reconnect With Others

Songs by Heart featured on WEKU in Kentucky 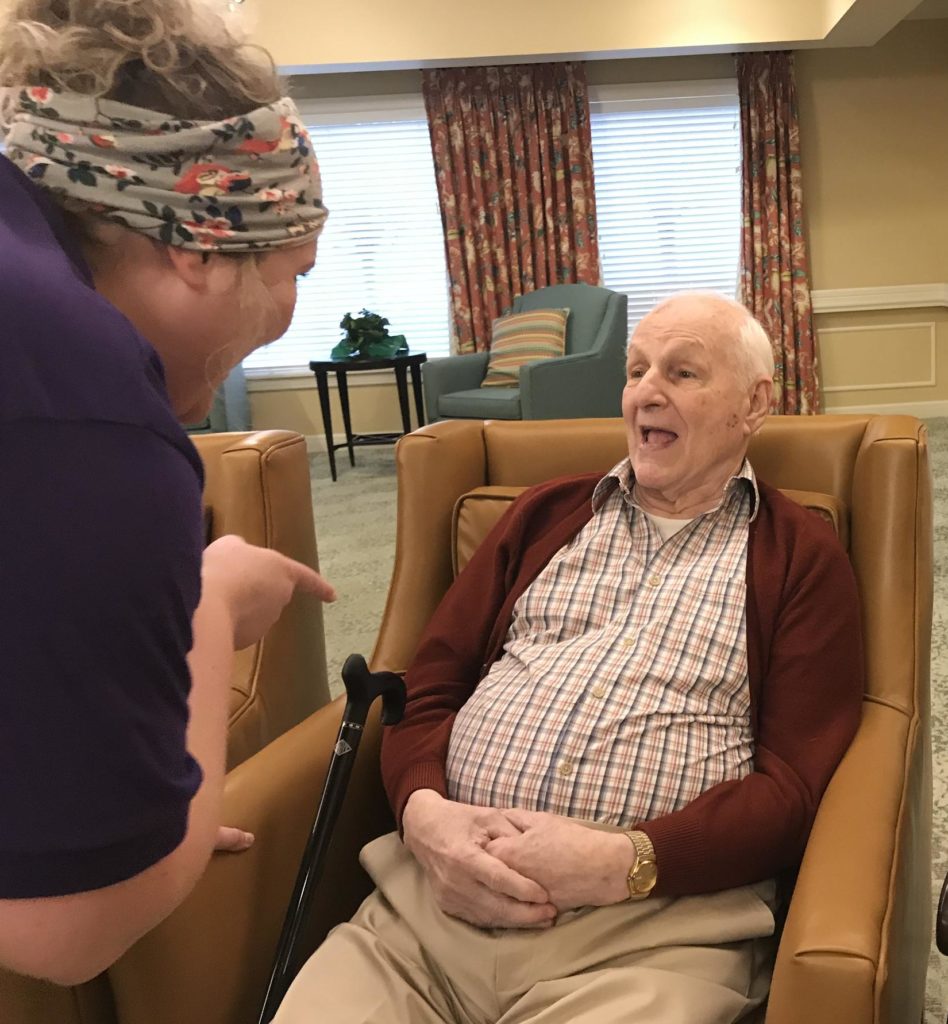 Songs by Heart on WEKU

Songs by Heart in The Daily Northwestern

Songs by Heart is featured on Phoenix’s Fox 10 News! 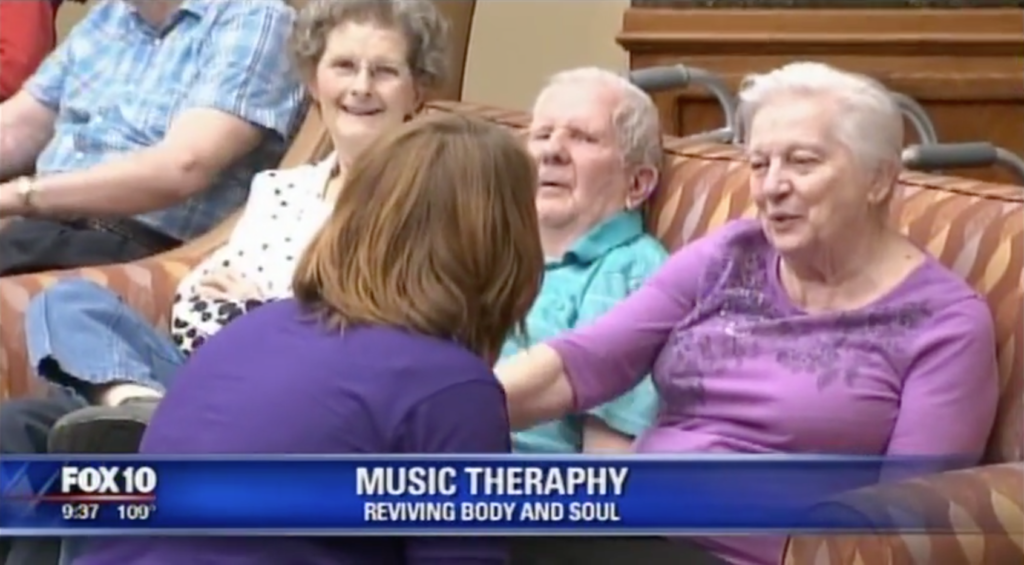 Radford Green of Sedgebrook began offering a program to its memory care residents in October that has people singing its praises – quite literally.

In addition to its current roster of activity programs, the senior living community recently invited Songs By Heart to visit three days a week. The organization offers professionally trained vocalists and musicians to lead interactive sing-along programs to engage with residents.

The results have been remarkable. In addition to toe tapping and finger snapping, many residents will also sing – an activity that for some was lost years ago as a side effect of dementia.

“The program is really enchanting,” says Mary Seaberg, Activity Program Manager for Radford Green. “For those who have lost the ability to have their voice heard because their word finding skills have diminished due to disease progression, songs and music help the residents come out and become alive again.”

It is the interaction the vocalists make with the residents as they sing songs, either by holding hands or making eye contact, that touches on the social, intellectual, emotional and spiritual aspects of wellness, Seaberg says.

Research indicates that music can shift mood, stimulate positive interaction, coordinate motor movements and facilitate cognitive function, and staff at Radford Green can certainly attest to noticing those improvements in residents during the music programs.

“We know music reaches our residents even if they don’t have cognitive impairment,” says Director of Assisted Living Leslie Green. “Watching some of the residents get up and dance when the singer starts to sing touches a part of your heart. Their faces just light up.”

Community leadership visited a Songs By Heart performance and knew immediately it was something they wanted to bring to Sedgebrook. When the performers came and performed a short demonstration of their act, it only took one song to notice a change in the memory care residents who live with dementia and Alzheimer’s disease.

“The residents were immediately alert and engaged,” Seaberg says. “Music is instant, gratifying and comforting to the residents. So when a song begins they perk up and tap their toes.”

Songs By Heart is designed for residents living in memory care neighborhoods, but it draws in spouses living in independent care for some quality couple time.

“It is very inspiring to see the music allow the clock to stop for 45 minutes for total engagement between spouses, and see the hand holding and snuggling come back to them during the program,” she says. “The music is the key.”

In fact, the staff at Sedgebrook recognize just how important music is to the residents that a player piano is located in the memory care wing, and upright pianos are located on the other floors for impromptu sing-alongs between staff and residents. Those locations are also used for other weekly live musical entertainment including guitarists, violinists, accordionists, flutists, saxophonist and vocalists.

“The staff is right there with them to engage and hold hands and sing,” Green says. “We are very happy that we are able to make this musical commitment to the entire community. There is a human need for touch and when you couple that with music it’s a win-win, all the way around.”

Nancy Gustafson hopes to improve the lives of people with Alzheimer’s disease and other forms of dementia through the power of music.

A Bienen School artist in residence and a professional opera singer for more than 30 years, Gustafson (G80) founded the Songs by Heart Foundation to bring quality-of-life-enrichment programs into retirement communities nationwide. Through interactive live music programming, the organization aims to improve the intellectual, physical, social, spiritual, and emotional well-being of those with age-related memory issues.

“We’ve been seeing amazing results,” says Gustafson. “In my opinion, every retirement community ought to have these programs every day. It makes the lives of people who have dementia that much better.”

During a 12-week pilot program in spring 2015, Gustafson partnered with the North Shore’s Presbyterian Homes to bring vocalists and pianists to Westminster Place in Evanston, Lake Forest Place in Lake Forest, and The Moorings of Arlington Heights for programming five days per week. The performers’ song book, customized for each community based on feedback from residents’ family members, included classic tunes from Broadway and Disney as well as old favorites such as “You Are My Sunshine” and “Take Me Out to the Ball Game.”

A key aspect of the Songs by Heart sing-along program is the interaction between musicians and residents. Before and after each session, the vocalists shake hands with every resident in attendance, making eye contact while welcoming them or thanking them for listening. Throughout the performances, they hold hands and sometimes dance with residents to further connect them to the music and their emotions.

“We have found that providing an interactive program, where you’re actually engaging the people and connecting to the people, is the important thing,” says Gustafson. “There is a huge difference between someone with dementia just listening to music as a passive activity and actually singing with the musician in an active way.”

A music-therapy consultant oversees the musicians and trains them to work with people with dementia. In order to be selected for the program, artists must demonstrate strong interpersonal skills as well as exceptional musical talent.

Emily Becker, who also serves as Songs by Heart’s artistic administrator, says it is truly heartwarming to see how much joy the program brings to everyone involved. “There are people at each location who seem to be asleep through the session but say ‘Thank you’ or ‘Come back soon’ with their eyes closed as we are saying goodbye,” says Becker. “I can’t imagine how dark and scary life must be for these folks who don’t even open their eyes often, and to see them smile or even communicate just affirms that what we are doing is making a real difference in their quality of life, if only for an hour a day.”

Gustafson was inspired to establish Songs by Heart after her mother—a 1949 Northwestern graduate—developed Alzheimer’s disease. Frustrated at being unable to communicate with her mother on any level, Gustafson turned to the piano. She was surprised when her mother commented on the playing and singing after only a few minutes—first saying that it “wasn’t very good” and then agreeing that it was much better after Gustafson switched to a different song.

“I joked with her that we could play music at the local mall for money, and she replied, ‘Yes, we’ll be the Gustafson Family Singers.’ I was shocked! Not only did she remember who I was, she came up with a new idea on her own for the first time in months,” says Gustafson. “Before we made music together, my mother didn’t recognize that we were related.” 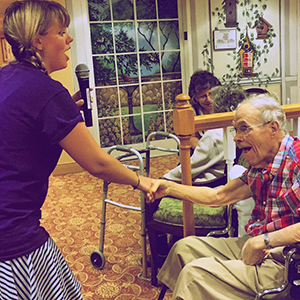 After that breakthrough, Gustafson and her sister arranged for a music therapist to visit their mother once a week and for a vocalist to sing with her two days a week. Impressed with her mother’s continuing response to music, Gustafson knew she wanted to find a way for others with dementia to have daily access to a program that could improve their quality of life through music.

The Songs by Heart pilot project helped Gustafson and her team develop best practices for interactive programming under the guidance of several consultants, including Mary Ann Anichini, vice president of continuous quality improvement at Presbyterian Homes. Anichini tracked residents’ engagement at all three locations during the 12-week period to measure the program’s effectiveness. Interviews with family members and caregivers suggested that resident participation and alertness continued even after a given music session ended.

Ultimately Gustafson plans to organize a national board of directors for Songs by Heart and offer programming in as many elder care facilities as possible. “I understand now why I studied music, why I was a performer, and why I have been teaching voice,” says Gustafson. “Everything was preparing me for this. This is where I feel I can really make a difference in people’s lives.”